Things That May Happen To Your Body When You Start Running!

Running gets a bad rap when it comes to your body – from your knees to your toenails, as a complete beginner, the horror stories come thick and fast. Yet what actually happens to your body when you start running?

It’s a well-documented fact that runners are happier people. In a recent study by scientists at Glasgow Caledonian University, 89% of runners said that running regularly made them happier, as well as having a positive impact on their mental health and body image.

You’ll be able to sleep and focus better

A study of 51 young people found those who ran regularly were able to sleep better, had signs of improved psychological functioning and focused better during the day. To get these benefits, researchers found all you needed to do was run at a moderate pace for 30 minutes a day, five days a week for three weeks.

Sadly, toenails going black is actually a very common running woe. You shouldn’t suffer from black toenails as a beginner, but as you clock up the miles, or start to run more regularly, look out for that tell-tale discolouring. But what causes black toenails? Three different things – a shoe that is too small, a toenail that comes into contact with the roof of the shoe too often, or a runner who uses their toes to grip too hard.

However it happens, the result will be the same – blood vessels under your toenail will break open, which spill blood into the area between the toe bed and the toenail, making it look black. Unfortunately, there’s not too much you can do and as the skin below the nail begins to heal, the black nail will die and fall off and the new nail will start to grow.

Another common running war wound – chafing is caused by friction as your skin rubs against yourself, or clothing. When it comes to chafing, prevention is key, so make sure you’re wearing the right gear and that your clothes fit well. Apply a lubricant to chafe-prone parts (your inner thighs are often a culprit) and keep your skin moisturised, as it will be less likely to chafe.

If you’re reading this too late, looking after your skin post-chafing can help it recover faster. Shower as soon as you can after running if you have chafing and use an antibacterial soap to avoid infection.

Blisters are caused by friction between the skin and another service, normally your socks, shoes or a combination of both. If you’re getting painful blisters, you need to look at whether your shoes fit correctly and whether you’re lacing them up in a way that holds your feet securely in position. You might also want to try wearing two thinner socks rather than one pair of thick socks, so friction occurs between the layers rather than against the skin. If you’re constantly getting blisters, it might be worth seeing a podiatrist for gait analysis.

Your nose might run as fast as your legs

Do you constantly need to wipe your nose as you run? Don’t worry, exercise-induced rhinitis is a common complaint for runners, especially when exercising in the cold or outside. It’s caused by irritated nasal passages, which in turn up their mucus production (nice). Some scientists also believe it’s made worse by pollution, which might be why you find it worse if you’re doing most of your running in the city. Most of the time, it’s just something to get used to, but if it’s really disruptive, talk to your GP about prescription nasal sprays.

Temporarily tasting blood in the back of your throat is again, nothing to worry about when running. It’s actually caused by your red blood cells popping, or releasing iron, which tastes like metal. It’s usually a sign you’re working your body hard and if it only happens once in a while, you don’t need to do anything about it. If, however, you taste blood every time you run, you should book an appointment with your GP to rule out any underlying infections.

If you’ve ever had to stop mid-run to look for the nearest pub toilet or public loo, rest assured you’re not alone. The sudden, urgent need to go is common in runners because of the inner jarring mechanisms involved in running. You can make things easier by avoiding sugary foods and caffeine before you run, and sticking to real foods like rice cakes and bananas.

You might find that, three minutes into your run, your thighs start itching like crazy. In some cases, this is dry skin or a natural response to warming up as your capillaries and arteries rapidly expand and stimulate nearby nerves. For some people however, it’s an actual allergic reaction known as exercise-induced urticaria, which can cause itching and flushing, hives, and – in extreme cases – breathing difficulties. If you do experience any of these symptoms, check with your GP, however, if it’s just itching, keep your skin moisturised, warm up gradually, and don’t worry about scratching if needed.

Creaking and cracking in the knees is totally normal. Crepitus, the medical term for that cracking sound, happens when cartilage, the connective tissue between bones starts to age. If you’re a younger beginner runner, weak quads or a tight IT band can also pull the kneecaps out of alignment, exacerbating the wear and tear. Make sure you’re strengthening the muscles that control the hips and knees in your strength training – this will keep your lower half in alignment and minimize the cracking.

Running headaches stem from a range of causes – from the really simple (your hat or headband is too tight) to the really complex (a proclivity for migraines). Two of the most common reasons are tight muscles (especially in the neck and shoulders) and poor hydration. Make sure you’re not too tense and hunched when you run, and when at home, try loosening off those neck muscles by gently dropping your left ear towards your left shoulder and right ear towards your right shoulder. Also, ensure you’re drinking to your thirst as you run. 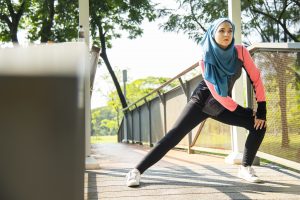 For followers of Islam, the ninth month of the Muslim calendar poses a particular challenge for runners of the faith. It is a time where

Sets of 500m, with rest periods between each repetition. A great workout for pacing control and cadence. Download PDF Here