These Ukrainian runners are still training in a war zone

They committed to staying active despite the Russian invasion. And feel stronger for it.

After Russia invaded Ukraine on February 24, life inside the eastern-European country transformed into a frantic combination of fleeing citizens and soldiers taking up arms. For days, Ukrainians holed up in shelters and underground metro stations as air-raid signals blared through the night.

But more than a month into war, regional Strava feeds have filled up again with cycling and running routes as athletes find ways to keep up their training amid days that feel otherwise anxious and surreal. ‘It’s my way to return to ordinary, normal life, and clear my brain,’ says Maxim Lievliev, of Chernivtsi, a 37-year-old runner who was on a train from Kharkiv to Kyiv en route to getting his UK visa for the Cardiff Half Marathon when the war broke out and cancelled his plans for the foreseeable future.

Our sister publication Men’s Health talked to four Ukrainian runners who’ve decided that it’s worth the risk to keep moving. For them, exercise isn’t a luxury but a physical and mental necessity, especially when so much else seems uncertain and out of control. New Ukraine laws prevent men between 18 and 60 from leaving the country, because they may be called to serve in the military, so all four men are stuck in limbo, unable to do much other than their jobs, shopping for necessities and, in some cases, volunteering to transport supplies and equipment.

All four runners work in tech, and for now, they are supporting their homeland by generating income. ‘That’s how we keep money going into our country, with salaries, taxes and so on,’ says Alexey Zarubin, a Dnipro software engineer. Each is eager to talk about how and why they maintain their outdoor training regimens at this uniquely terrifying time. Here are their stories:

I live in Kharkiv, but we left on March 5. My mother stayed there and told me she was out of water and electricity for two weeks. My father is in a hospital and we can’t take him home.

In Kharkiv, I just had two runs for probably seven days. It’s too dangerous.

Our company found two buses for people who wanted to leave Kharkiv and go to Lviv. In ordinary life, it probably takes 20 hours, but there were many traffic jams and checkpoints, so it took 36 hours.

Lviv is a very safe city because it’s controlled by Ukraine troops and the active military activities are far away. I’m trying to get my previous form. I like the city for running. Many parks.

When you start on the second or third kilometer, you forget about all this madness and just run, like you’re dreaming. Running helps to pull yourself together and don’t sit on your sofa and start crying. It helps not to do that.

My family says, ‘You’re crazy! It’s a war, and you run?’ But after running, I can think about the current situation in some new way. I can overcome my emotion and feel so much better.

After I run to a lake, I dive into cold water and dress and run home. It’s a new way to get your body fresh. Last year, I ran about 5,000 kilometres On average, it’s more than 10K a day.

I have two kids, six and eight years old and a wife. I have a brother who lives in Germany. They live with him now. We booked a bus and it took more than one day to transfer from Lviv to Berlin. There was really huge confusion on the border, especially on the first day of war. People trying to escape the country. Now the situation is much better.

In the west, near the Poland border, it’s much safer than Kyiv. But even today, a few bombs landed near our airport. Fortunately, there is no death, but still very scary. I planned to start running this morning and saw that there’s aircraft alarm: ‘You need to go to shelter.’ I needed to postpone my running for two hours.

The first day in our city, there were two air attacks on our airport and nothing else for three or four days. Then, on Sunday, I ran for the first time, just 5K. I listened for the alarm along the city and ran back home as quick as I can. The alarm makes you know it’s time to go to the bunker. When alarms are on, we go to the basement and sit there and wait until it ends.

My wife and my daughter – she’s three – and the mother of my wife escaped. They left by train from Dnipro to Lviv, then Lviv to Ukrainian border on a bus, then crossing a border with Poland. It took like 22 hours. They are in USA right now. My wife has a sister and they live with her. But my parents don’t want to leave, they live in their flat in Dnipro. Also, grandmother, grandfather – it’s really hard for older people to leave their flats.

I cycled twice, not far from home. Running, cycling, also gym and swimming. I have five workouts per week. Last Sunday, I ran 23K, like two hours. I live near an embankment and pretty much always run around that. It’s not good to run along bridges, because there are some of our warriors there. Our city is really good for walking, running.

In our city, it’s pretty calm, but in some other cities, it’s so dangerous, and bad things happen, so it’s hard not to think about it. Running is like my everyday life. It’s a time when you can spend it with yourself. 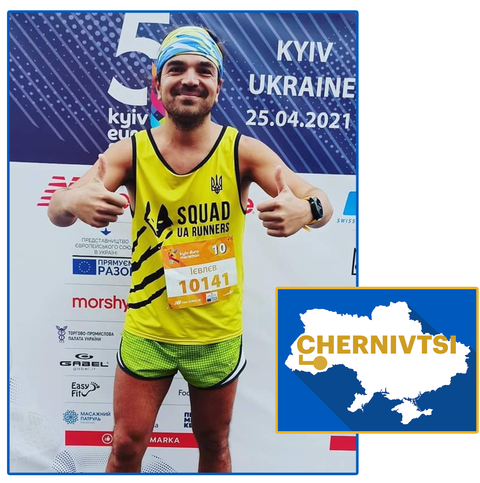 When the war started, I was in a train from Kharkiv to Kyiv. I was supposed to go to United Kingdom to get my UK visa for the Cardiff Half Marathon. My train was delayed for some hours. When I arrived, my two children and my wife were in Kharkiv, about 500K away. My first idea was, ‘How can I return to my family?’

I found a bus to Poltava, and after that, through friends, we call a taxi, and go back to Kharkiv. I found my family in an underground station. They were afraid. We slept in the underground station near our house for three nights. It wasn’t an easy time.

I was in Kharkiv for 10 days after the invasion. I relocated with my family to Lviv, and after that, to Chernivtsi. It’s a safe place in Ukraine – for now.

When war started, I didn’t even think about running for two or three days. I think, ‘How can I bring my family to be safe?’ After that, between the tanks, between the alarms, ‘Maybe I can run 5K, 6K?’ But when I’m running, I hear missiles not very far from me. I was afraid and I go to the safe place after that.

I was in the Kyiv Marathon and the Alexander the Great Marathon in Greece. My best is 2:42. I have every-day training and I run about 130K in a week. In Chernivtsi, I return to my running session, almost as it was before war.

I believe we will win this war. I don’t think it will be very soon, but we can resurrect our country from ruins. After that, we can run many marathons.