I had no idea that running was going to be a long-term hobby, I just thought that I’d run a few shorter races before taking on the London Marathon. I’d run that, celebrate and be done with it. But somehow, I got the bug and kept going. The love that I have for putting one foot in front of the other comes in some part from developing good habits as a beginner. Here’s how I believe a beginner runner can get motivated to run, enjoy their running and, importantly, want to stick with it for the long-term.

How to get motivated to run

One of the most important things that I did in the beginning was to set myself a realistic goal. This gave me focus, so on days when I wasn’t feeling very positive about getting out there, I would return to the goal. I would ask myself, how do you plan on reaching your goal if you don’t put in the work? The reason I say realistic is, if my goal wasn’t attainable, I would more than likely not have been as motivated to try and achieve it. It doesn’t matter how big or how small the goal is. It doesn’t have to be based on time or distance; it could be as simple as ‘I will run three times a week’ – it’s entirely up to you.

The fitter I got the more freedom I had to explore. I found myself venturing to places that I had never been. Prior to marathon training I had never been along the Thames Towpath, I had never run through the woods with deer in Richmond Park and never watched the sun set or rise from the top of the hill in Greenwich Park. One of my favourite phrases is ‘I wonder what’s down there?’ It keeps me moving. As the years have passed running has taken me all over the world and without it my experiences would not have been nearly as memorable.

3. Have fun and try new things

Something that dawned on me pretty early is that if we are 100% honest, running can be a little boring and ever so slightly repetitive sometimes. I noticed that even with a realistic goal I still needed something else – the FUN element. I would introduce little games to training to keep me motivated. I would try and beat a bike or car to the lights. I’d speed up if I saw a white van and slow down if I saw a convertible. I would imagine my street as a final straight on a track and my block as the Olympic stadium. Instead of just going for runs that took me to and from home, I would arrange to meet friends at coffee shops, restaurants, parties or museums. Anything to give my run a little more purpose, or make me smile. I also realised that with my new-found cardio confidence I was more willing to try new sports or disciplines that would help me to be a fitter and stronger for running. What are you waiting for?

Sleep, sleep and more sleep. This is still one I struggle with, but I am getting better at getting my eight hours a night. Why? Sleep replenishes, repairs and regenerates our bodies. Lack of sleep also increases perception of effort meaning, when you haven’t slept enough, running feels harder. And why would you want that?

5. Ask questions and immerse yourself in community

When I got into running I sought out people who knew more than I did and asked questions. I read books, magazines, watched movies, listen to podcasts and went to meets. I wanted to know how they made this thing that I found so hard look so easy. Then I went looking for my tribe by way of a running club, then crew, then brand. Now they are family. Have you found yours? 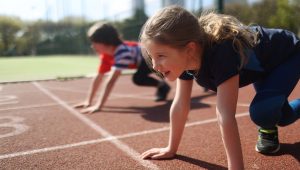 What amount of running is safe for children and teenagers